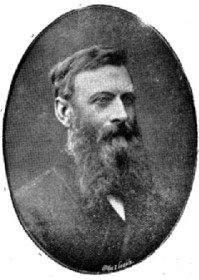 This noble monument in Public2 section was erected for James Barry, “a man with a bright eye, a firm step, and of upright figure, is a pleasant, although not frequent sight to be met with in a day’s journey”.

James was born in Moray, Scotland in 1836 and he trained as a builder. After spending time on the goldfields of Victoria and Otago, he came to Wellington and established the construction firm of Barry & McDowall. Their partnership was a lucrative one. Two important examples of their work were the Supreme Court Buildings and the Post Office.

James had married Mary Ann Cruickshank in Wellington in 1866. They had no children of their own and adopted a little girl called May Robertson. James died in 1909 and his Will included provision for the purchase of books for St Andrew’s School on The Terrace and his old Sunday School in Moray and. After Mary’s death in 1915, May inherited a considerable fortune. She died in 1951 and her Will included 400 pounds upon trust for the New Zealand Academy of Fine Arts. May also directed that upon her death, the Barry plot should be cemented over and strewn with white pebbles. It’s probably time it had a clean up.