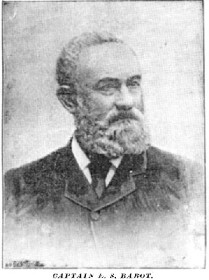 Edwin Sinel Babot, Master Mariner, died in April 1903 – just a few months after starting his retirement. He was born about 1831 in Southampton, educated at Greenwich College and in 1846 went to sea as an apprentice in a vessel trading to South American ports.

He was marine super-intendant in London for the Shaw, Savill and Albion Company and came to Wellington in the same capacity in 1884 holding that position until retirement.

A biography on Edwin in January 1903 said that he had sailed in almost every class of ship, in every navigable sea, and in every position from apprentice to master.