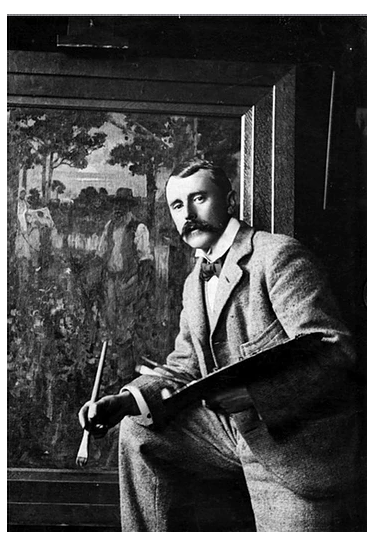 Nairn studied at the Glasgow School of Art for four years from 1879 before enrolling as a student at the Academie Julian in Paris. During the 1880s Nairn exhibited work at the Glasgow Institute of Fine Arts and the Royal Scottish Academy and was associated with the Glasgow Boys a group of Scottish artist interested in Impressionism.

Nairn emigrated from Glasgow to Dunedin for his health in 1890. He moved to Wellington in 1891, where he was appointed as an art instructor at the Wellington Technical School. He lectured on art and conducted classes for the study of the nude figure. He introduced the Impressionism of the Glasgow school to New Zealand and influenced other New Zealand artists such as Dorothy Kate Richmond, Maud Winifred Sherwood, Mabel Hill, Maude Burge and Mollie Tripe.

Nairn joined the New Zealand Academy of Fine Arts soon after settling in Wellington and was elected to the Council from 1890 to 1903. He also formed the Wellington Art Club which met regularly at Nair’s Pumpkin Cottage. The cottage became a gathering point for Wellington artists. Nairn’s influence was felt throughout New Zealand as he regularly sent works for exhibition in other centres.

Nairn painted extensively in the Hutt Valley area around his Pumpkin Cottage, especially in the last ten years of his life. He worked in oils, watercolours, pastels and charcoal.

He died, aged 44, at his home in Wellington on 22 February 1904, probably of peritonitis. He was buried in the first Public area of Karori Cemetery. His name on the pink granite column headstone is now obscured by lichen.